What to Eat Before, During, and After Running

What you consume—and when you have it—can help improve your running game, whether you’re a 5K-er or a long-distance runner. Discover the secrets to powering up for success. Even if you only jog the occasional few miles, you’ve likely heard about marathoners carb-loading before a race or long run. But pasta isn’t the only food that can help you run well, and it’s not just endurance athletes who benefit from proper fueling. What you eat before, during, and after your runs is crucial to helping you feel good, pick up your pace, and recover quickly.

“Nutrition throughout the entire day, weeks, and months has an impact on all your workouts,” explains Kyle Pfaffenback, PhD, assistant professor of nutrition and exercise physiology at Eastern Oregon University and a nutrition consultant for the Brooks Beast Track Club. “Thinking about it as an aspect of training will help optimize all your runs and allow your muscles to recover and adapt, too.” This is how to eat and drink like a serious runner.

What to eat before your run

If you’re running an easy-paced 3 to 4 miles (or less): Skip a pre-run meal. “If it’s just a few miles, you don’t need to eat before,” says Vishal Patel, chief sports nutritionist at Nuun, who has worked with elite athletes such as Kara Goucher. There will be enough glycogen (the body’s most readily accessible form of energy) in your muscles to power you through. Drink 8 ounces of water or a low-calorie sports drink before you head out, though, especially if you’re running first thing in the a.m. (because you wake up dehydrated).

Before a run more than 4 miles long or any speed work: Eat 50 to 60 grams of complex carbs, like oatmeal and a banana. “This tops off glycogen stores,” says Pfaffenbach. Eat 1 1/2 to 2 hours prior to give your body time to digest and soak up the nutrients.

For a tough tempo workout or sprint intervals: Have a carb-rich meal the night before. Stick to a supper that has pasta, rice, or quinoa (balanced with protein and veggies) before any key-workout day to up glycogen stores, which is important for high-intensity performances at all distances, says Pfaffenbach.

What to eat and drink during your run

If you’re running for less than an hour: Water is sufficient, unless it’s especially hot or humid.

For runs an hour long or more: Once your runs get around the 60-minute mark, sip a low-calorie electrolyte-based drink; the added electrolytes can increase muscle function. Electrolytes (namely, sodium and potassium) help muscles retain fluids, receive oxygen and function properly, says Patel. “Getting them in fluids, rather than in a solid snack, helps deliver the electrolytes to your muscles faster,” he says.

When you’re going for 90 minutes or longer: Eat about 20 grams of carbs every 25 to 30 minutes. Muscles store enough glycogen to fuel about an hour-long run. After that, you’ll need 30 to 60 grams of carbs an hour—from sports drinks, gels, or chews—to maintain your intensity. “Eat early and often for a regular flow of nutrients,” says Pfaffenbach. Your brain realizes you’re low on fuel before your muscles do and will start to slow you down as a precaution. During runs 90 minutes or more, sports drinks with carbs and electrolytes can help you maintain pace and delay fatigue. Choose ones with a concentration of 3 to 4 grams per 100 milliliters); higher amounts may cause GI issues. (Gatorade, for instance, is about 6% carbs; try watering it down to sidestep an upset stomach.)

Towards the end of your race: Swish a sports drink around in your mouth, then spit it out: Just rinsing with the sugary drink can trick your brain into recruiting more muscles (especially when they’re depleted) and enhance your performance, according to recent research in Medicine & Science in Sports & Exercise. No tummy pain, all gain.

What to eat after your run 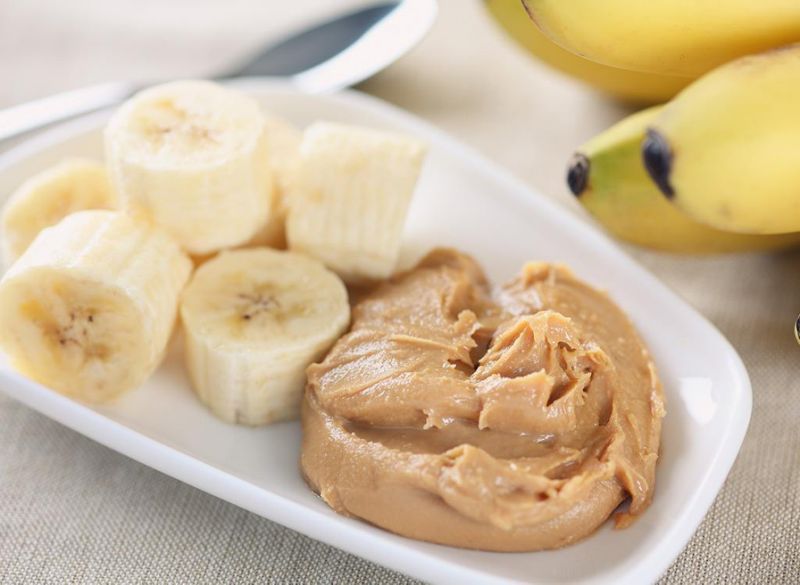 Once you’ve logged the miles, have a bite within an hour to reap the most rewards. “When you’re running, you’re breaking down and stressing your muscles; the time when you get stronger is during the recovery period,” explains Patel. Reach for a meal with a 3-to-1 ratio of carbs to protein. Why? Carbs are more important, as they replenish the glycogen stores (i.e., the go-to energy source) in your muscles. Already know the power of chugging chocolate milk post-workout? Other options with the right ratio: a banana or apple with peanut butter, a berry and a banana smoothie with a scoop of protein powder or an oat bar with an almond, hazelnut, or peanut butter center.